This article was originally published by EFT Founder, Gary Craig, on EmoFree.com, entitled "Acne – Tapping for What Got Under Your Skin"

Lots of things can "get under our skin" and cause us problems. Colleen Flanagan uses this concept to clear her client's long standing #acne. This idea is useful for many other issues and is well worth studying.
Hugs, Gary

A friend who I'll call "Don" has had severe acne since his teen years.  Now in his late forties and having tried many acne specialists and prescriptions, the condition persists and worsens when he is stressed or upset.  This fact tipped me off that #EFT might be able to release the negative emotions that "got under his skin".

While hiking together one afternoon, I gently suggested to Don that we try EFT to relieve the acne, starting with the large lumps on the back of his neck.  He replied that he'd try anything. The lumps had been there for many years.

As Don didn't know which emotions caused them, I used #surrogatemuscletesting (SMT) to uncover the core issues.  I found he had level 10 fears of failure and rejection by his father from years ago, when they were in a power struggle about rebellious young Don's future.  Don is from a traditional ethnic culture in which the children are expected to obey and please the parents, no matter what age they are.

GC COMMENT: Colleen Flanagan likes to use muscle testing but this isn't required. For example, I prefer to ask questions to get at causes. Both ways can be effective.

COLLEEN CONTINUES: As we hiked through the mountains, he followed my lead and tapped using these setup statements:

Even though I'm afraid and angry at my father for trying to control my teenage and adult life, I choose to forgive him and myself for carrying this anger and fear under my skin.

Even though I feel like a failure for not being the perfect first born son, I forgive myself and release this fear that my father might reject me.

Even though I store this fear, anger and guilt about my father under my skin, I now chose to release it and let my skin heal.

When SMT (surrogate muscle testing) indicated that his level of intensity was 0 on a scale of 0 to 10, we worked on a large facial lump on his right cheek that he'd had for months.  The muscle testing indicated the exact month the trauma occurred.  Don admitted that he'd lost his job then and it felt like a slap in the face.  He still had many negative feelings about his ex-employer, all at an intensity level of 10 out of 10.  We tapped on these setup statements:

Even though I felt like I took it on the cheek when they let me go, I forgive myself for anything I might have done and I forgive them for firing me.

Even though I was so angry at them for not even giving me a chance to prove myself and being fired felt like a slap in the face, I now release these negative emotions and let my skin heal.

Even though I was afraid my girlfriend would think I was a loser and reject me after I got fired, I choose to feel safe because we are still together and in love.

Even though I have this huge fear of failure and being fired from another job, I choose to feel safe and know that what happened in my past is not my future.

I then asked Don to think about being fired and the years of arguments with his father, which had previously upset him.  He grinned at me and exclaimed, "I'm okay with everything now - it's over!"

When I saw Don again a month later, the acne lumps on his face and neck had shrunk to only minor skin discolorations.  Within three months, the discolorations had completely vanished.

Gary, I've effectively used EFT to release fears that "got under the skin" of many clients and myself, causing neck rashes, moles, itchiness and other irritating skin conditions.  EFT is safer than chemical ointments, longer lasting and only costs a few minutes of tapping.

The human body's largest organ is the skin. It's an accurate indicator of our emotional well being.

Articles for Senior Well Being

Want to learn more? Check out this video demo about tapping away your adult acne emotions. You don't have to suffer with acne! 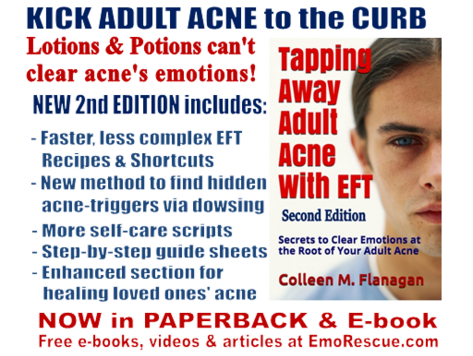 ​Don't GUESS at the EMOTIONS

Subscribe FREE to my bi-monthly ezine of wellness & dowsing tips.

Get the first 10 chapters of my EBook, "FEARLESS ACCURATE DOWSING" as a GIFT! 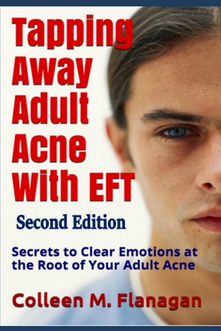 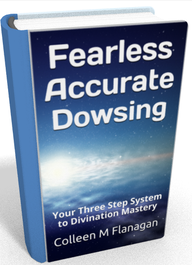 owner of "Tapping Away Adult Acne"

"Colleen, I just have to thank you so much for all the amazing help you give me. Not just helping me to clear my acne but you are a massive emotional support! You get me through the hard times! Endless thanks!" --Sadie S., USA