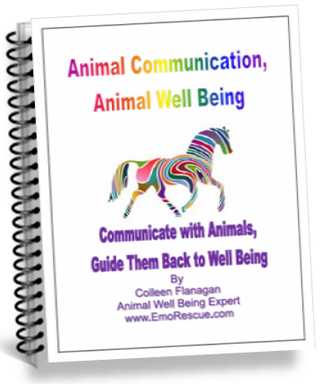 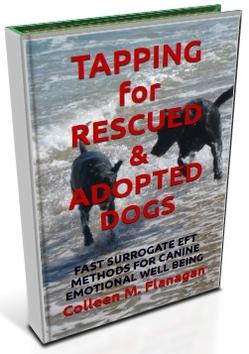 Grab your FREE COPY of Animal Communication, Animal Well Being

You and your family can learn to easily and quickly  communicate with animals, as I did!

(Includes my complimentary bi-monthly e-zine of holistic tips for you and your pets.)

All my secrets to helping your dogs back to well being are in this ebook! 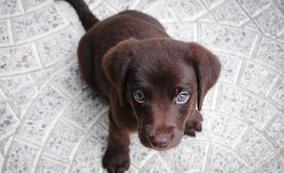 Using a Screensaver Photo to Do Remote Clearing

"Dear Colleen, I want to thank you for your help with my precious dog 'Inuk'.  I did do the suggested 3 (emotional) clearings this morning then I cleaned his nose and he let me this time run some healing energy thru my hand left on his nose.

He wouldn't let m do this before. THANK YOU again for your help. Bless you." 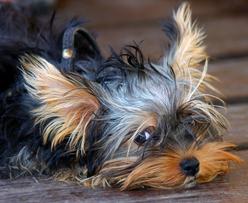 This article's clearing statements can be modified to dissolve the

Originally published by EFT Founder, Gary Craig, on EmoFree.com as

I really like this article by Colleen Flanagan because it points out so well the value of EFT (including surrogate EFT) for animals. She says, "Many pet owners don't realize how traumatic any change is for their animals. People often assume that animals somehow understand they will be safe with changes made to their environment. The animals' instincts tell them just the opposite." Please consult veterinarians in a case such as this.

Many pet owners don't realize how traumatic any change is for their animals. People often assume that animals somehow understand they will be safe with changes made to their environment. The animals' instincts tell them just the opposite. They might feel helpless, out of control, trapped and terrified. Pets may not show their anxiety or fear because their instincts tell them that they will appear vulnerable to attack by alpha animals or predators.

Just like people, some animals are more emotional than others, and suffer silently about any changes, even new noises outside their home such as road repairs or house construction, new human or animal family members. I encourage all animal caregivers to apply EFT to their pets, especially before and after any changes in the animals' lives.

While consulting at a corporate client site, I complimented an employee "Jane" about the Chocolate Lab puppy screensaver picture on her computer. She replied that "Cocoa" was now over a year old. The dog suffered from constant ear infections since she was brought home at eight weeks old. Jane tried many costly remedies and medications from the veterinarian but nothing worked permanently. The vet now wanted to perform expensive surgery on the dog's ears.

I asked Jane, who's familiar with my EFT work but a skeptic, if I could use surrogate EFT on Cocoa's photo to release any fears causing the infections. I told her that I'd treated many animal clients that retained fear blocks in their energy systems from being taken from their animal or human families to their adoptive home. Strange sights, sounds and smells are terrifying to animals. These unreleased fear blocks can result in physical conditions at any time in the pet's life.

Jane protested that her dog had no such blocks. Cocoa had been friendly, fearless and happy since the first day they'd brought her home.

I advised her that the surrogate EFT might help even if the dog didn't have fear blocks, and it certainly wouldn't make things worse. Jane rolled her eyes at the wacky idea that I could help her pet via the screensaver picture, but gave me permission to proceed.

First, I imagined what a tiny puppy would feel when separated from her canine mom and siblings, put into a car, driven across town and maybe feeling motion sickness then placed in a strange new environment. The puppy's instincts told her that she couldn't survive without her dog pack, causing Cocoa much separation anxiety in her new home. With the canine sense of hearing being much greater than human sense, Cocoa probably tried hard to hear the comforting sounds of her dog family, even crying out for her mommy at night and for her human family when they went to work.

(NOTE: get your FREE EFT Chart HERE on my Free Stuff Page - opens in new window.)

I gazed at Cocoa's puppy photo and felt severe level 10 anxiety rise in my solar plexus. I began surrogate EFT on my left Sore Spot with these Setup Statements:

- Even though I, Cocoa, strained my ears to find my dog mommy and have had constant ear infections since then, I release all my fears of not being safe.

- Even though I, Cocoa, felt so afraid of everything I heard, smelled and saw when Mommy and Daddy took me to their home, I now release these fears. I feel safe in my forever home and my ears feel safe to completely heal.

- Even though I, Cocoa, missed my dog mommy, brothers and sisters so much that I listened hard every day and night to hear them again, I forgive myself and my human adoptive family. My human family loves me and protects me as part of their pack. I release all blocks to healthy, healed ears and body. I, Cocoa, am free of infection or disease.

I tapped on behalf of the dog with these Reminder Phrases, did a 9 Gamut Procedure, then repeated the Reminder Phrase surrogate tapping on all the points, including my finger points as I looked at the puppy's photo:

EB: Terrified of leaving my doggy mommy, brothers and sisters.
SE: Crying out for them, straining my ears, so afraid of leaving my family.
UE: Listening so hard to hear my doggy mommy where nothing seems familiar or safe.
UN: All these frightening new sounds, smells and sights and my ears hurt so much.
CH: Afraid of being abandoned by my dog pack, still listening for them when I was a baby dog.
CB: I'm a big dog now, safe no matter what I hear, safe for my ears to heal now.
UA: Choosing to feel safe in my human pack, safe with the sounds, sights and smells.
BN: Mommy Jane loves me and wants my ears to heal, to be free of infection.
TH: Releasing all my fears of not being safe since I was born. I am now safe in my forever home.
IF: Releasing my fear blocks to healing my ears.
MF: Relaxing and releasing any blocks to healing any part of my body.
BF: My ears and entire body are healed, healthy, strong and empowered.
KC: Feeling energetic, happy, healed and healthy!

After the tapping, my anxiety level was at zero. I knew Cocoa's fears were gone. I thanked her for being such a good canine client. I asked Jane to let me know if the ear infections healed and she agreed. I never heard back from her.

Seven months later I saw Jane again and asked about Cocoa. She said, "I told my husband what you did that day to our dog's photo and we both had a good laugh. But we're not laughing any more. Cocoa's ear infections went away and never came back the day after you did that tapping stuff."

When I ran into Jane again at the corporate site eighteen months later, I inquired about her Chocolate Lab's health. Jane said, "Still no more ear infections! I don't know what you did, but it worked - thank you from all of us!"

Anyone who adopts pets or is a foster animal parent may want to consider using surrogate EFT on their animals or tapping directly on the animals, whether or not there is evidence of stress or anxiety. Think about their history including veterinarian visits and surgeries or being a stray or re-homed, imagine what the animal must have felt, seen, heard or smelled, then tap away their fears of not being safe from birth to the present.

Tapping regularly on our pets and ourselves can result in optimum health and well being for all.

Does your dog or puppy need

an Emotional Rescue, too?